"My name is Zoma. I rule the dark world. So long as I live, this world too shall be smothered in darkness. Suffer and despair for me. your suffering is my joy... All that has life shall become my sacrifice. The world will know despair."
— Zoma

Zoma is the final boss and chief antagonist in Dragon Quest III. Near the end of the game, he is revealed to be the master of the archfiend Baramos, who had previously been seen as the final boss, having personally sent his minion to conquer the Overworld in his name. Zoma resides in his citadel in Alefgard. He also makes appearances in the Dragon Quest Monsters series and in Dragon Quest IX as a legacy boss. An extremely powerful sorcerer and the self-appointed master of darkness, Zoma is the one who plunged the world of Alefgard into eternal night in antiquity.

In many ways, Zoma's appearance is a callback to both the Dragonlord and Hargon - all three are blue-skinned adversaries with a similar posture. Unlike these, Zoma is tall and menacing; he towers over the heroes, with a menacing, almost skeletal appearance, blue skin, and a mage's robe reinforced with armour. His helmet is his most iconic feature of the outfit, featuring a singular, unblinking eye. His hands are tipped with razor-sharp claws that make for effective weapons in their own right. Despite his large size, Zoma is terrifyingly agile, capable of moving about with shocking speed and agility, often swinging his clawed hands in dramatic arcs to strike foes.

Zoma is hallmarked by the fact that while he is both immensely powerful and intelligent, his plans, for the most part, are largely inscrutable. He is evil to an extreme, but his actions are so far outside normal human behaviour that he is difficult to classify. Completely divorced from human morality, however, he is free to pursue unfathomable goals of destruction and horror. In Zoma's mind, the world represents nothing more than a bevy of opportunities to spread his vile will.

Zoma's true nature is difficult to discern because the player is given so little, but things become clear as the player advances through Alefgard; Zoma's presence is a presence of darkness so profound that light itself causes him pain, and without the protection of his shrouding darkness, he is such anathema that healing magic actively causes him harm. Zoma has an enormous amount of undead forces and demons at his disposal as a result, including an undead version of Baramos. He wields destructive magic of ice, and uses it with brutal effectiveness. The manga portrays Zoma as something beyond undeath, a living force of entropy, decay, and despair.

Unlike the scheming Dragonlord and religious Hargon, Zoma has no overarching scheme beyond spreading evil and destroying the forces of good. He does not desire money, save as a means to tempt mortals. He does not seek power in and of itself, though this would put him into a position to bring tragedy down on a greater number of individuals. It is this inscrutable nature that makes him disturbing to face, though Zoma himself reveals his true motives if you look into his dialogue - he delights in suffering, pain, misery, and betrayal. Hence, his physical might was so much powerful from all those feelings of despair that he was able to shatter the original Sword of Kings made long ago, albeit after a prolonged effort of three years. Zoma's love of suffering, though profound, ultimately proves to also be his biggest weakness; he is so enraptured with forcing his enemies to endure horrors that he will often stay his hand just to savor the protracted misery. His doing this, ultimately, is what allows Erdrick to save Rubiss, approach his castle, and, ultimately, slay him.

Zoma first appears during the celebrations following the defeat of Baramos. In the original game, only his voice is presented, but in the remake he is physically seen as well. Zoma threatens the inhabitants of Aliahan, claiming he will soon control their world and plunge it into darkness as he did with Alefgard. In Dragon Quest Monsters, he resides deep inside the Room of Control, threatening Terry the same way he threatened the people in Dragon Quest III.

With Cloth of Darkness

Without Cloth of Darkness

Zoma resides on the basement floor of the castle along with three other sub-bosses. He approaches and talks to the Hero prior to allowing his three subordinates to fight the hero's party before him.

Zoma has his own battle theme, a general standard for a final boss. Using the Sphere of Light reduces Zoma's overall hit points, allowing him to be defeated much more easily. It also enables the party's healing spells to actually damage Zoma. The party's Priest, for example, can cast Fullheal on Zoma and deal damage.

In the remake of Dragon Quest III, Zoma's specialty music and primary color palette are not shown until after the Sphere of Light is used. This color arrangement is the opposite of the one in the original game, which made Zoma a blue color after using the Sphere of Light.

Upon his defeat, Zoma's reign over the land of Alefgard ends; and light returns to the outer world. The Pit of Giaga also closes up, sealing the hero and his party in Alefgard and rendering them unable to return to Aliahan. However, Zoma warns of a coming darkness in the future, which is later shown in the first Dragon Quest.

Zoma appears as a Legacy Boss, obtained after completing Quest #167 (or received at special events).

1st Turn: Cast Gritty Ditty and Life Force on your party while the fighters use Falcon Slash.

While Zoma himself doesn't make an appearance, he is foreshadowed through the Dark One's battle with the Luminary and his allies, having a shroud of shadows and his boss theme when said shroud is dispelled of. The game also reveals that he has a wife, Zomaiden, one of the Past Masters.

He appears as the boss of the Gate of Control.

Zoma is an X rank monster. He has double trouble and makes for a good mage.

A great X rank monster that, although he no longer has double trouble, he instead gains bouncer and tactical trooper making him still a great unit. It is necessary to have either Zoma or Orgodemir to make Rhapthorne 2.

Zoma appears in Dragon Quest Heroes in downloadable content, and can be fought. Gragworth gives Luceus or Aurora the Sphere of Light to dispel Zoma's barrier, which is recommended. He fights with his ice magic and Disruptive Wave, the former of which can freeze them solid. 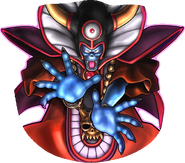 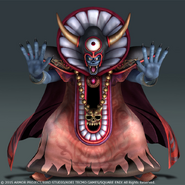 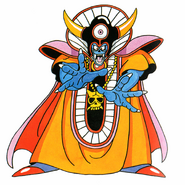 Zoma from Emblem of Roto 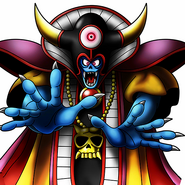 Zoma, as seen in Dragon Quest of the Stars